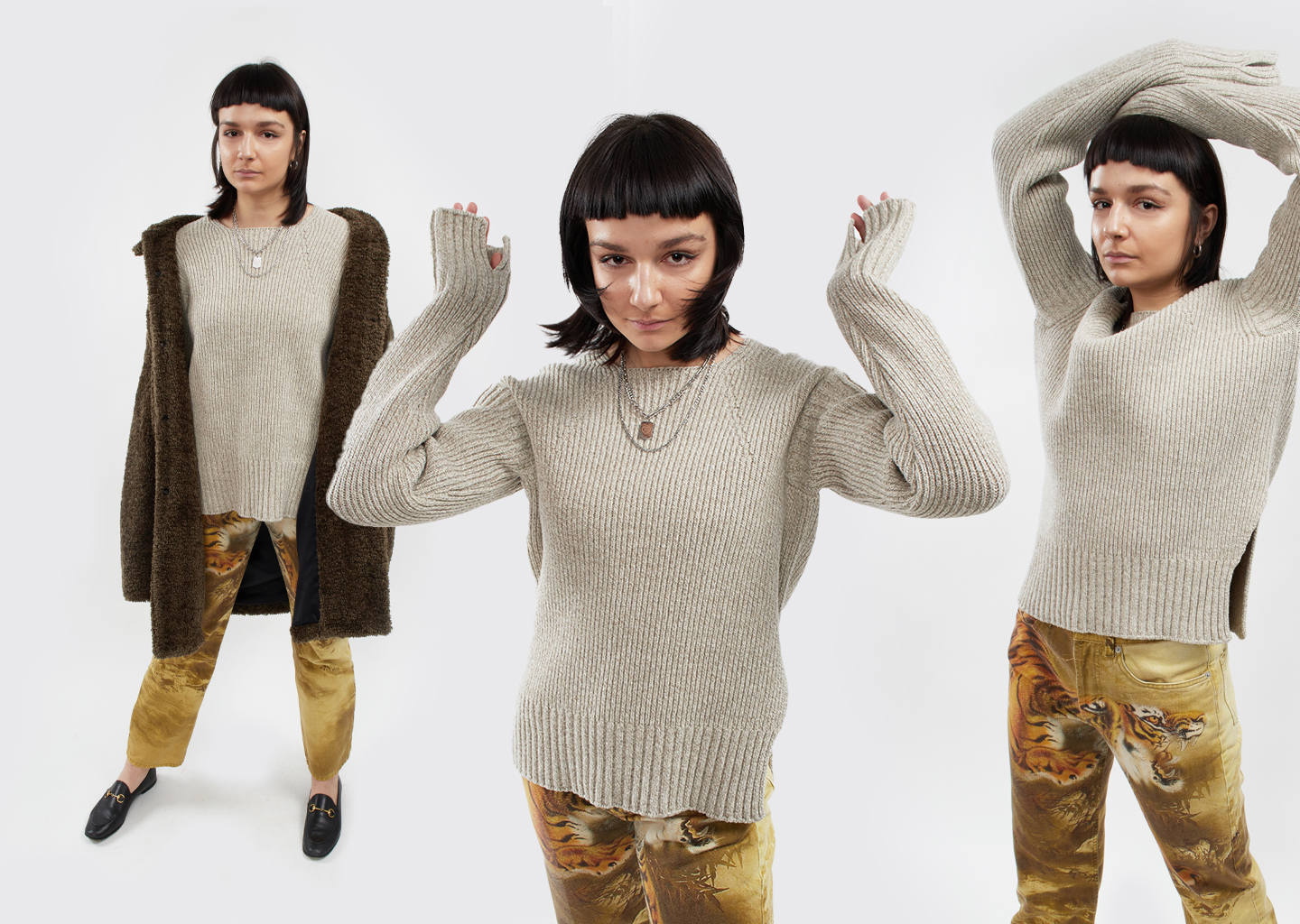 An argument can be made that sharing fashion opinions on social media takes an extra layer of fortitude compared to most other subcultures. Yell about a football player on Twitter and no one will ask you to upload a video proving you can throw a perfect spiral. Critique an album on Instagram and it’s unlikely you’ll be asked to strum a riff of your own in order to legitimize your stance.

When it comes to fashion discourse online, the sentiments of the old, forum-era rebuttal “talk shit, post fit” still run deep. Criticize a celebrity style choice or runway show in public view and your avatar will be dissected, let alone a lingering fit pic you may have uploaded years ago and god forbid you’re still using capital letters in your bio. Fail the digital style vibe check and your fashion opinion is dead on arrival.

These passive norms exist within the sometimes-edgy domain of High Fashion Twitter and the since-soured gathering spaces around Diet Prada. In the burgeoning world of fashion TikTok, you'll find a mixed bag of try-hard posters still grasping at old straws alongside a newer genre of more casual, informative and, oftentimes, welcoming style influencer. Within this refreshing Venn diagram is Alexandra Hildreth, a Millennial-Gen-Z cusp with an impressive amount of IRL industry experience on her resume and an account that has become one of the most productive, whimsical and occasionally troll-filled corners of the platform’s fashion arena.

On a recent overcast afternoon, we caught up with Alex to learn more about her dog walking outfits, favorite fashion week memories and the depths of her eye removal For You Page.

What is your favorite Season?

Yeah, t-shirt under a jacket under another jacket. My summer wardrobe is terrible because I sweat too much. I love winter, the cold, the snow.

Do you have a favorite piece in your wardrobe right now?

Honestly, my Hydro Mocs. I have a dog that I have to walk four times a day and these are the easiest things to put on.

Over Covid The Cut did an article on Norma Kamali and she was wearing the white ones and I was like “What are those? Are they Crocs? I need to find these”.

Other than Merrell, who are some of your favorite brands right now?

I love Bode but literally can’t afford anything Bode. I love Prada, old Prada suits. I’m currently trying to recreate through thrifting the Prada Fall/Winter ‘97 collection. Either just similar pieces or the actual pieces themselves.

What about the Prada Fall/Winter ‘97 collection do you like?

‍Your TikTok username is guyfieri.superfan. Do you have a favorite Guy Fieri fit?

I have a really classic Guy Fieri flame shirt. I went as him for Halloween like my junior year of college and then it just became such a joke and people started getting me Guy Fieri-themed stuff. When I started TikTok I was just shitposting but then it started blowing up and I was like “oh no, I don’t think I can change it now”.

What type of shitposting were you doing?

I was just posting old edits of runway clips from shows that I’ve been to. My former boss wanted to see how well fashion stuff would do on TikTok and then I just started making commentaries on random stuff and they started blowing up in succession and I was like “oh, maybe I should just keep doing this”.

And since then you’ve enjoyed doing more commentary than shitposting?

Yeah, my dream job would be to do fashion journalism. Robin Givhan, Vanessa Friedman-type situation. Not that I’d expect a Pulitzer but, you know, I’d like to write serious stuff, critical theory...

So more writer than video presenter?

I feel like TikTok has given me a really good audience but that’s why I started a newsletter too.

How would you describe high fashion TikTok?

So how would you describe the fashion community on TikTok?

I feel like you have the same subdivisions. There are a few fashion TikTok people that I’m friends with in real life in the city like Arianna (@ariannasclosetarchive). We’d realized that we had been in the same place so many times at fashion week. There is literally a show where I have a photo of her sitting behind me, then we realized we were also neighbors in the Lower East Side so now we’re friends.

Whenever I meet some other fashion TikTokers though I feel really bad because I don’t know a lot of them because literally my FYP is the weirdest thing possible. There’s no fashion.

I’ve been on it for a really long time and I really want to be off of it.

‍When it comes to your own videos, is there a comment or a question that you tend to get asked the most?

People just ask for a lot of quick opinions and hot takes. Hot takes obviously do really well but what I want to do is more cultural criticism and theory. I’ll do a video of a quick opinion but, for example, I always say how much I don’t like collabs if it’s just a logo times another logo so then I got so many comments asking for a review of the Supreme x Tiffany’s so I just made a video saying that I’m not going to make a meme video of it, you guys know what I think.

Do people try to push you into it?

Yeah, they definitely try to provoke you.

People just want hot takes so they have something to yell about?

Yeah, I saw a video the other day where this guy was saying that Comme des Garcons is overrated. What a hot take to have no information behind it! Everyone was obviously blowing up the comments.

Yeah, like what is going on? I have never experienced more cyber bullying in my entire life though then when I made a video on sneakers.

I am unfortunately not surprised

I was making some point and then I just got so many DMs from like 15-year-old boys on Instagram. They literally had to click over, through all of my runway work and producing, and then still be like “you’ve clearly never worked in fashion before”.

It’s very strange. I thought some of the popular guy fashion TikTokers were pretty young but it turns out they are mostly my age. But then you have all the FIT students. . .

My theory about straight guys is that they only start to think about clothes or fashion, at best, during early college or late high school, which is much older than most women, in my experience

I went to college in Scotland where a lot of Americans went but we had this thing where the first time a straight, American guy wore all black on a night out, they were officially on the other side. They had finally discovered All Saints.

It would typically be around the first semester sophomore year.

Can you explain a bit more about your hatred for logo x logo collabs?

I don’t think all collabs are bad and I totally understand them from a cash grab point of view. Like the Gucciaga collection, there was some stuff on the runway that I thought was really cool. They had a green silk dress with a leather harness over it with riding boots. I loved that look but then you just see the Gucci monogram bag with spray paint saying “this is not a Gucci bag”, I hate that. The logo x logo stuff just has no real design integrity in it. It’s the same way I would never just wear a logo t-shirt.

Do you think the logo x logo collabs are related at all to the sort of creative director carousel going on in fashion?

I think so. I think it all holds so much less weight than people think it does. Do you remember when that 19-year-old kid had a full, complete collection of Supreme box logo tees and it went for auction at Christie’s. Everyone thought it was going to go for millions of dollars and like no one bid on it cause it’s literally just t-shirts.

That kid is probably huge into NFTs right now. Did you ever have a streetwear phase?

I’m definitely more into the tailored side of clothes. My high school dress code was Vineyard Vines, if I wear full streetwear I just feel dumb. I know someone so fast would be like “this you?”

I feel like so much of what you’re wearing has to do with confidence and for me, if I wear full streetwear I would just feel like a poser. I’d rather just feel more comfortable, it’s possible to put together a good outfit and still feel uncomfortable. I’ve worn things to fashion week before where I’m like “I know this looks good” but all I can think about is how much I hate these ruffles on my shoulders.

‍You’ve mentioned fashion week a few times. What brought you to those shows?

For the past few years since graduation, I worked for a creative director @beyondthemag. Now I’m doing a bit more freelance work while kind of doing my own thing. We did a ton of fashion week work, we worked with MAC backstage and a lot with The Federation in Paris. We would go every season, do couture every season and then we would do London and Milan once a year and then obviously New York every time.

Do you have any favorite fashion week memories?

The Gaultier final couture show in Paris in January 2020. Literally every major model possible was walking. Every other retired major model was in the audience. It was like a theater of 3,000 people and just an hour long performance. It was so much fun, it was literally history. That one felt the most fun.

That was your favorite show?

The other one would be Mugler Fall/Winter ‘20, but I haven’t liked the collection since.

What’s your impression of shows post-Covid? I feel like there was a lot of talk during the pandemic. . .

Having experienced the fashion calendar pre-Covid, is there anything you wish would change?

I feel like all these brands, when Covid happened, they were like “oh, we’re gonna go off schedule” but to me going off schedule makes it worse. Just stay on the schedule and don’t show eight collections a year. Like that’s it. We don’t need Gucci in January and then two and a half weeks later everyone is flying back to go to some random Valentino show.

Yeah, everyone seemed real hype about the idea of ditching the calendar

Coming back to New York, what are some style trends you’re noticing in the city right now?

I definitely think the whole Bushwick fisherman beanie, cuffed jeans is not going away.

I mean, I think it looks nice. If you don’t have a really specific style, at least you don’t look bad.

It’s such a safe zone.

How about for women?

I think as more women get into menswear and more tailored silhouettes as opposed to what's kinda cheugy or millennial, I like that look more than skinny light wash jeans and a black leather jacket.

Yeah but I feel like gender-neutral clothing always just ends up being menswear or really weird drop-crotch sweatpants. I just like everything when it’s more tailored.

What’s a good piece of clothing you think a guy can build their wardrobe around?