From Medicine to Margiela, a Brief History of the Face Mask 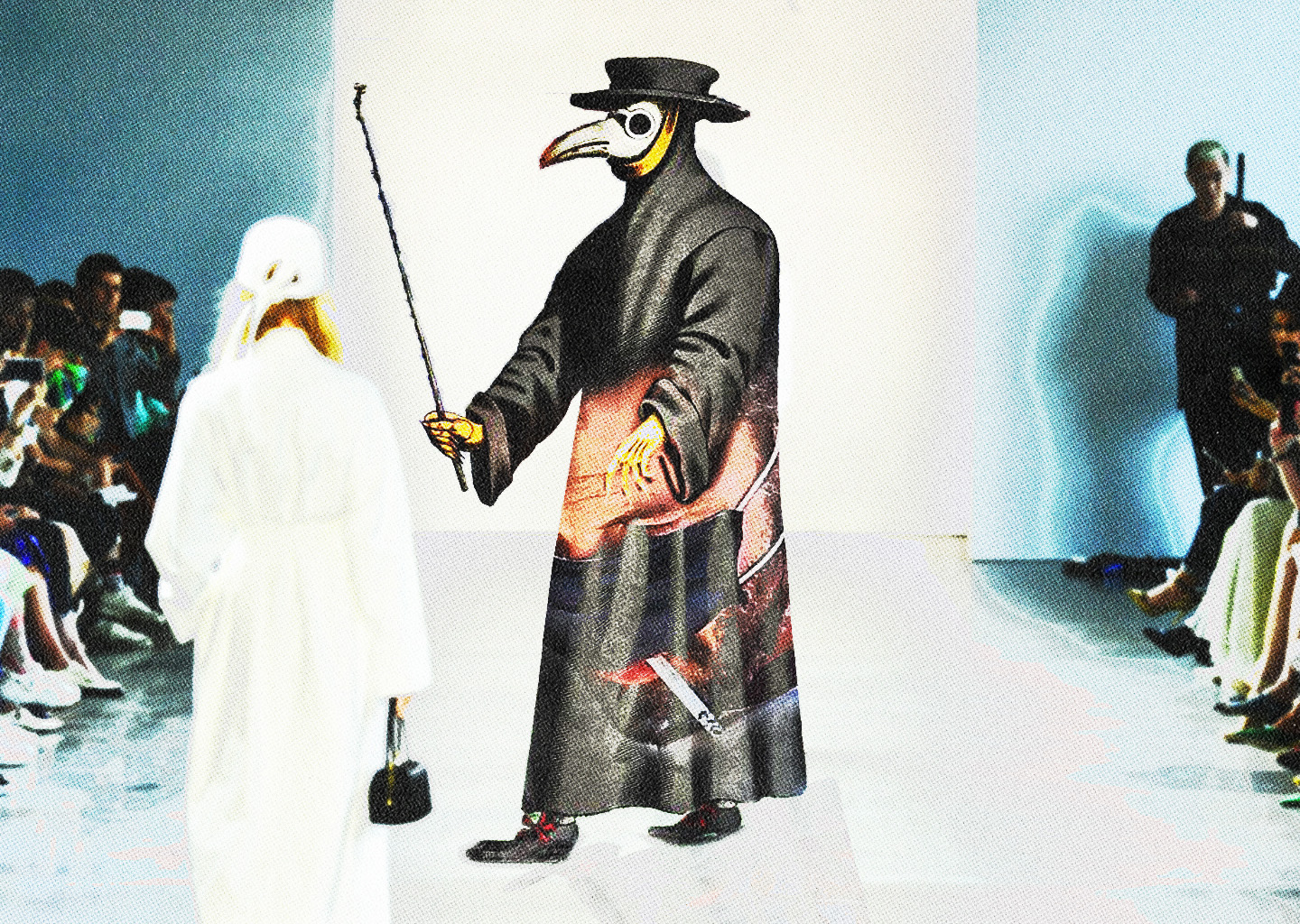 As face masks have increasingly become a talking point and symbol of our current world, the simple piece of fabric has outlined many of the social, political and economic issues evolving in real time. Throughout history, masks have played an important role as a medical instrument and clothing garment.

The first recorded use of masks for health purposes is credited to Pliny the Elder, a Roman philosopher and naturalist. He used animal bladder skins to filter dust from being inhaled while crushing cinnabar, a toxic, mercuric sulfide mineral used for pigmentation in decorations. For many, when we consider masks used for disease prevention, the terrifying, leather-beaked masks worn by medical professionals during the later waves of the bubonic plague comes to mind. The belief at the time was that disease was caused by miasma, or bad smells in the air, and the beak worked as a place to store aromatics such as mint, rose, camphor or a vinegar sponge.

Face coverings stuck around after the plague. Ladies wore veils in the 19th century to avoid inhalation of dust, combining fashion with medical care. A.J. Jessup, a physician from New York, recommended wearing cotton masks during epidemics to prevent disease spread, the earliest mention of such in 1878. In 1905, Chicago physician Alice Hamilton recommended the use of masks during surgery, citing her experiments observing how much strep bacteria is expelled when her sick patients coughed. In 1918, the Spanish flu epidemic caused many cities to require masks in public for the first time. By 1920, masks became a medical standard for doctors performing surgery.

Over the years, the materials used for medical face masks have changed as our understanding of disease has evolved. Current science suggests that the best combination is a well-fitted mask made of tightly woven cotton, which works as a mechanical barrier for particles, and fabrics that hold a static charge–some chiffons or silks–which serve as an electrostatic barrier.

As masks weaved their way into common medical practice, they also entered the world of style and fashion as a standalone garment. In China, for example, masks became a symbol of civic-mindedness and scientific awareness, with Communist propaganda using the masks to represent care for the community . Today, masks are worn across most of East and Southeast Asia in part for personal safety from smog and other air pollution, and in part to demonstrate politeness in public.

The mask has also been pushed as a fashion accessory throughout the 20th century.  A 1929 column for the newspaper Xinwen Bao, “The Most Fashionable Spring Accessory: A Black Face Mask,” was written by journalist Yan Duhe in response to the meningitis outbreak. In more recent history, runway designers like Alexander McQueen and QIAODAN Yin Peng Sportswear have used masks to striking effect in their runway shows as practical items to resist cold or pollution. Masha Ma took that a step further with a mask studded with Swarovski crystals on her 2015 runway.

In response to the mask’s surge as a clothing accessory, major medical mask manufacturers like Vogmask and Respro have begun to explore making masks with style in mind.

“We had done the medical side of the masks really well, so people knew it functioned and that we had all the testing and scientific proof that our masks worked and filtered,” Christopher Dobbing, director of Vogmask China, told Jing Daily in 2014. “The second challenge was making people aware that it can be a fashion product and it’s something that can look good on you.”

Despite its popularity overseas, many western cultures have been slower to adopt mask wearing outside of medical use. In many ways, the face mask in modern America has become more synonymous with crime and protests than public health. In recent years, striking images of people wearing masks have been paired alongside public protests like the black bloc protestors in 2017 following Trump’s election. While the protestors themselves explained that they wore masks to help mitigate the effects of tear gas and pepper spray, as well as to avoid retaliation from police, media interpretation often aligned face coverings alongside dangerous intentions. Recently, masks have been equated to cowardice, shame, and weakness, as well as liberal ideals, and many cities implemented anti-mask laws. While in community-oriented China, wearing a mask demonstrated civic pride and people working together, American individualism has complicated the garment’s symbolism.

The history and prominence of mask-wearing in Asian cultures has also seemed to deter its adoption in many western communities. Today, anti-Asian sentiment related to the “Chinese virus” has caused some to refuse to wear masks in a warped display of patriotism. Other minority communities have also been hesitant to adopt masks out of concern over racial profiling. A recent viral video documented two black men being kicked out of a grocery store for wearing masks, while the New York Times recently reported that in Brooklyn, 35 out of 40 people arrested for social distancing violations were black, 4 were hispanic and 1 was white.

Clothing designers may be uniquely positioned to help the fight against mask stigma during such a crucial moment. Masks have long held a place in the streetwear fashion wardrobe and many designers are now busy working on mask designs that might appeal to the modern sense of style for both men and women. San Francisco designer Saul Sugarman has focused on plaids, bold florals, and geeky designs, and the masks have a pocket to add your own filtering medium. Rwanda-based tailor Alexander Nshimiyimana has been making masks with a variety of traditional African patterns. Rag and Bone have produced denim masks and many fashion producers have altered production lines altogether to aid in medical mask production. With the current public health crisis sure to be written into the face mask history book, it remains unclear what legacy the current generation will leave behind.