How Kapow! Are Redefining Gender Norms Through Music and Fashion 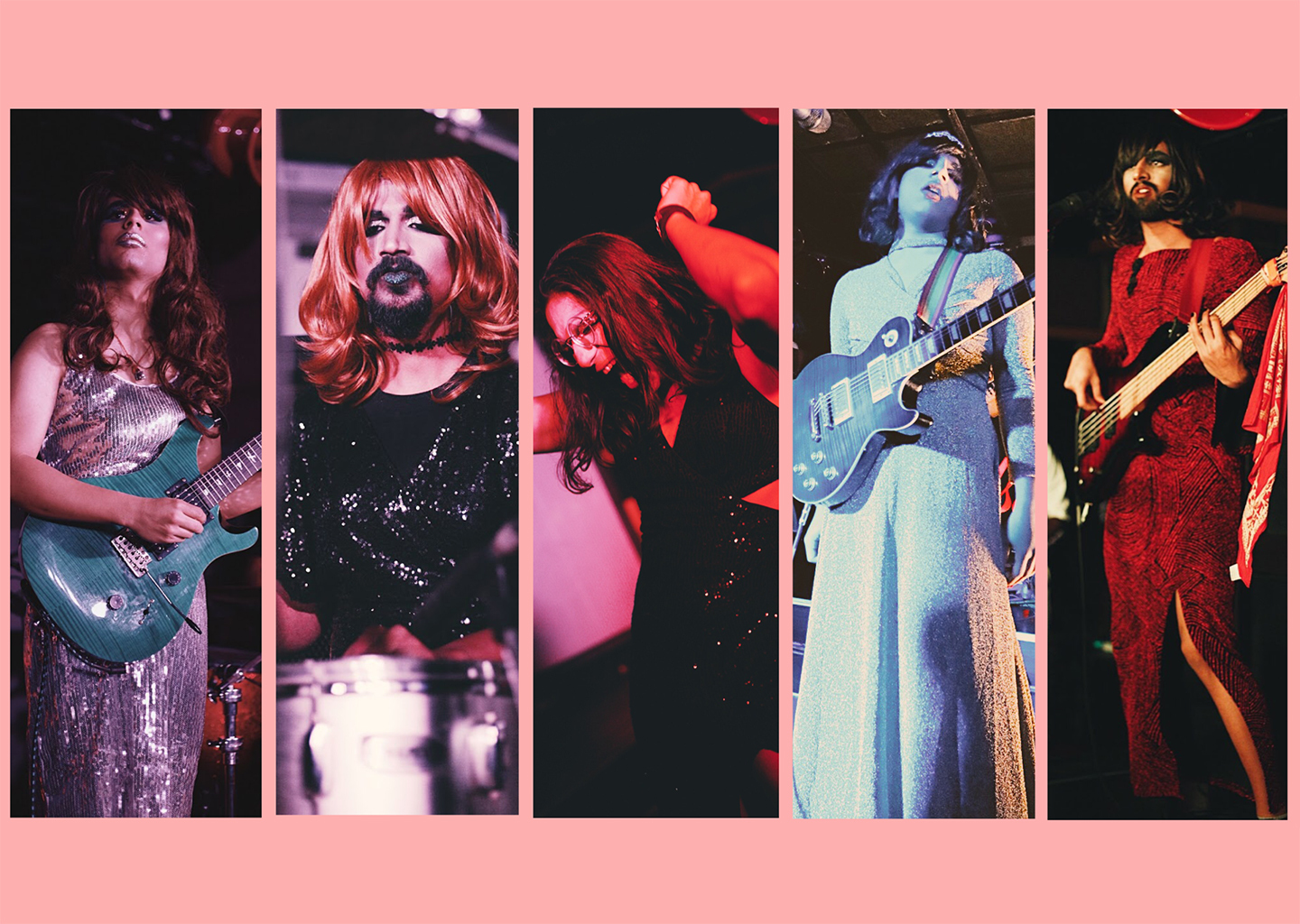 In late February, before the coronavirus hit India, the band Kapow! performed as drag queens at Kitty Su, one of New Delhi’s most elite clubs, for the launch of their global album ‘It’s Kapow Time’.

Sequined slit dresses, tiaras, heels, wigs with elaborate curls and bangs, the band made sure they left a mark throughout their performance. Its reception was humongous, with Rolling Stone India calling the band a ‘sonic delight’.

There are some notable drag queens in India like Alex Mathew, Humza Mian and Randy Scarhol, but a band of straight men performing drag is unheard of. Their goal was to support the art and challenge the belief system that ‘drag is not for heterosexuals’. Opposing toxic gender notions and sexuality associated with drag culture is hugely uncommon in India and prevents heterosexual men from supporting it.

“The stereotypes are a big hurdle for anyone who wants to dwell into this art form in India. People raised questions about my sexuality, my sexual orientation and even my gender but drag has nothing to do with it” said Mayank Mittal, Kapow!’s lead vocalist.

Another challenge is lack of awareness and education. The landscape of queer culture in the south Asian country became a global conversation in 2018 with the landmark decision to overturn section 377, a law that criminalized homosexual acts.

“The learning curve of wearing something not designed for men and still looking absolutely fine and comfortable was important for us” Bharath Rajeevan, Kapow!’s bassist, emphasized. “If the entire notion of certain clothes for a particular gender didn’t exist, the human race would be more accepting in terms of queer fashion.”

Social stigma still exists, however, which more or less arises from rejection of the LGBTQ+ community, Abuzar Ahmad Khan, the band’s guitarist, explained. “We’ve realized how powerful this art is as a tool through which the LGBTQ+ community deserves to be represented and supported.”

The concept of drag was never alien to India. Gender fluid art forms existed throughout history in the shape of classical dances such as Kuchipudi and Kathakali where men cross-dressed to perform on stage. Alex Mathew is one of India’s most famous drag artists, popularly known as Maya.

“There have been artists before Alex but for us, watching Maya was pivotal” said Kapow! guitarist Vinod Arora. “Many famous Bollywood actors in the 90s such as Amitabh Bachchan, Kishore Kumar and Aamir Khan in early 2000 have cross-dressed in their movies. Except for Ru Paul, Queen and Kiss, the Indian film industry played a huge role in terms of drawing inspiration.”

Band members faced resistance from conservative parents and family members when explaining their vision. “Change does take time but someone has to take charge and start from somewhere” said Prakhar Srivastava, the band’s drummer. “We want to travel across the country and perform as drag artists to spread awareness in communities.”

“If the entire notion of certain clothes for a particular gender didn’t exist, the human race would be more accepting in terms of queer fashion.”

Before releasing their album, Kapow! had toured various cities in India. Their funky wardrobe with bright polka-dotted pajamas paired alongside chic suspenders and a peculiar band-name always drew attention. Kapow! is less of a name and more of an expression to capture their comic presence and explosive energy, according to Shikhar Verma, videographer and social media strategist, “We experimented with ‘Yaba Daba Doo’ and ‘Blip on the Radar’, but Kapow! is what truly struck a chord with our spirit.”

The new album boasts of six songs, with some music yet to release in the coming weeks. ‘Want Some Get Some’ is a nasty rock jam, while ‘Smells Like Your Sex’ is raunchy and groovy ballad. ‘Underwater Roadtrip’ has acoustic riffs and playful beats, ‘Sultana’ is in many ways the soul of the album, inspired by The Arabian Nights, works of Haruki Murakami and The Alchemist by Paolo Coelho. ‘Cardio’ is a go-to workout song, while ‘Start Again’ would palliate a heartbreak.

For their live performance the band closely worked with the famous Indian drag artist Betta Naanstop.

“Betta helped us with the theme, vibe and was essential to guiding us how to perform. Betta was our reference point for the entire show” Mayank said. The opening act of the band’s performance was a mesmerizing performance by Betta, setting the mood perfectly for their debut launch.

Their vision has always been to be able to appeal to a global audience while including aspects of Indian culture.

“Our songs are inspired by Indian elements but also have lyrics, music, and an energy that parallels international chart-busters”  Mayank added, “My personal goal is to perform at the Wembley Stadium because Freddie Mercury’s 1985 performance is the one that inspired me to become a musician.”

Their country-wide ‘KAPOW! Goes Drag’ tour has been delayed due to the current pandemic.

“Our inner queens are lying dormant inside waiting to be out” Bharath said, emphasizing a dying need to get back on stage, “Deep down you know what your queen wants. Just gotta listen to it.”