The Loneliness, Anxiety, and Inspiration of Adrian Tomine 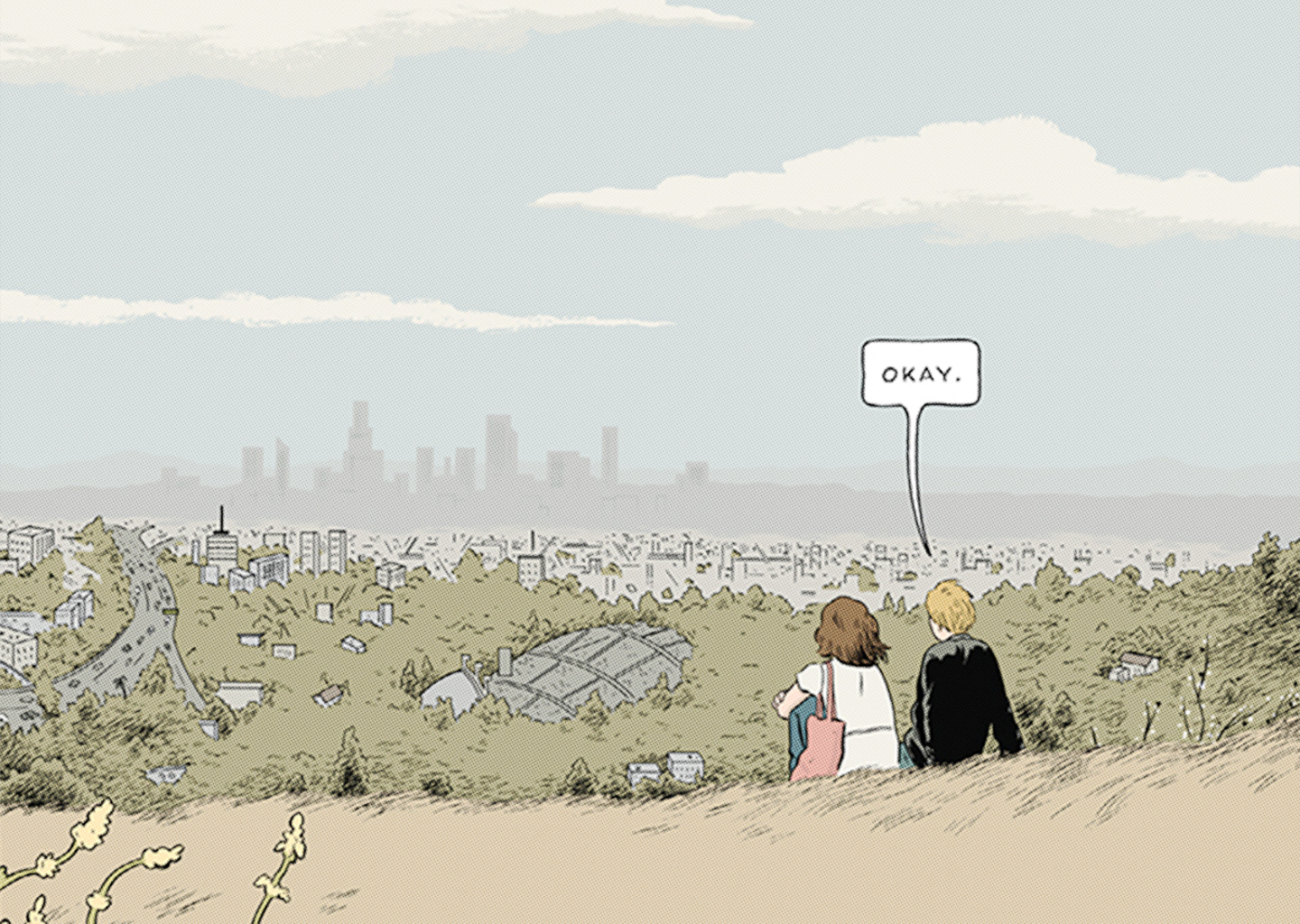 New York, 2008: Cartoonist Adrian Tomine sits at his computer, practicing saying thank you to Fresh Air’s Terry Gross, over and over. “I’ve been listening to other people’s interviews and making notes about anything that sounds awkward or weird,” he tells his wife.

But, of course, as drawn in Tomine's recent graphic memoir, The Loneliness of the Long-Distance Cartoonist, when his dream interview finally happens, he immediately loses his nerve. In fact, he leaves his body and hovers like a ghost, saying things to himself like, “This is by far the biggest exposure you’ve ever had. Millions of people are listening.”

As Gross asks if he draws his glasses the way he does to avoid showing his Japanese American identity, Tomine breaks into a flop-sweat. He looks out the window and notices a bloody dental procedure taking place in the next building. He bombs his thank you. And in the section’s final panel, as a despondent Tomine waits for the train, his ghost pops up and yells, “Jump!”

Like many of the book’s vignettes, the scene shifts from slapstick to self-deprecating to sad (and back) within a few pages. Tomine portrays his misadventures in minimalist black-and-white sketches, just enough detail for readers to feel, and often laugh at, his pain. (In case you’re wondering, Cartoon Tomine is a uniform dresser, oxfords rolled to the elbow, along with his signature plastic frames and beard.)

The Loneliness of the Long-Distance Cartoonist traces his career, from being called “the boy wonder of mini-comics” to drawing New Yorker covers and publishing multiple books, including 2015’s Killing and Dying, a New York Times bestseller. You can read The Loneliness of the Long-Distance Cartoonist in an hour or two, but its brevity isn’t without depth.

Maybe more than anything, the book reminds readers that even when you make it, the struggle never ends. In the longest and final section, Tomine delivers a mostly heartfelt monologue that serves as a mission statement for the project. He says that it’s weird when your childhood hobby turns into your job. He also feels lucky and grateful. “But still…my clearest memories related to comics--about being a cartoonist--are the embarrassing gaffes, the small humiliations, the perceived insults.”

They include: getting roasted by critics and friends, nearly shitting his pants in front of an interviewer, offending a stalker-superfan, and being mistaken for an IT guy by an older cartoonist.

Along with loneliness and anxiety, casual racism is one of the book’s common threads. During an early Comic-Con appearance, Tomine fantasizes about befriending Frank Miller, a boyhood favorite whose presenting an award that Tomine has been nominated for. But when Miller gets to Tomine’s last name, he pauses and says, “I’m not even gonna try to pronounce that one!”

Throughout the book, Tomine continually tries to correct people’s pronunciation of his last name. (He recently told Publishers Weekly, “The way I pronounce it is not exactly the way that everyone in my family pronounces it, but I say toe-MEEN-ah.”) Keeping with the book’s pacing and playful tone, he quickly moves on from these moments.

Researching Tomine’s career, I’ve wondered what he thinks about the consistent interest in how he does or does not address race in his work—In 2007, he published the graphic novel Shortcomings, answering readers who had challenged him to write about issues of race and ethnicity.

On The Loneliness of the Long-Distance Cartoonist, Tomine told the San Francisco Chronicle, “Just by virtue of me putting [certain experiences] in the book, people are going to think that my blood is really boiling about them. Things like the mispronunciation of my last name… I’d love to go on record and say that the feeling is not that intense.”

While promoting the book, Tomine has also talked about how he was ready to switch up his style after Killing and Dying, which took him seven years to complete. The acclaimed short story collection is often melancholy, precisely drawn, and colored with muted, almost pastel tones.

With The Loneliness of the Long-Distance Cartoonist, Tomine wanted to create the comic equivalent of handwriting, pared-down and personal. Even the square panels are imperfectly drawn. To put his simplified style in context, Tomine designed the published book to look like a black Moleskine, complete with an elastic closure strap, bookmark ribbon, and stickers on the cover. Its pages are printed over a graph-paper-like blue grid, as if you’re holding the author’s actual notebook.

Taken together, the book’s drawing style and physical design make Tomine’s story feel even more intimate. It’s like listening to a brutally honest podcast, a lifeline to all the creatives, trying their best during the pandemic. There’s something inspiring about reading the mishaps of an artist you admire. Because you know that after everything, they kept going. ‍

The book’s final page shows Tomine back at his desk, in the middle of the night, with a notebook and a pen. It made me want to do the same.

New to the Archive: Racing Jackets