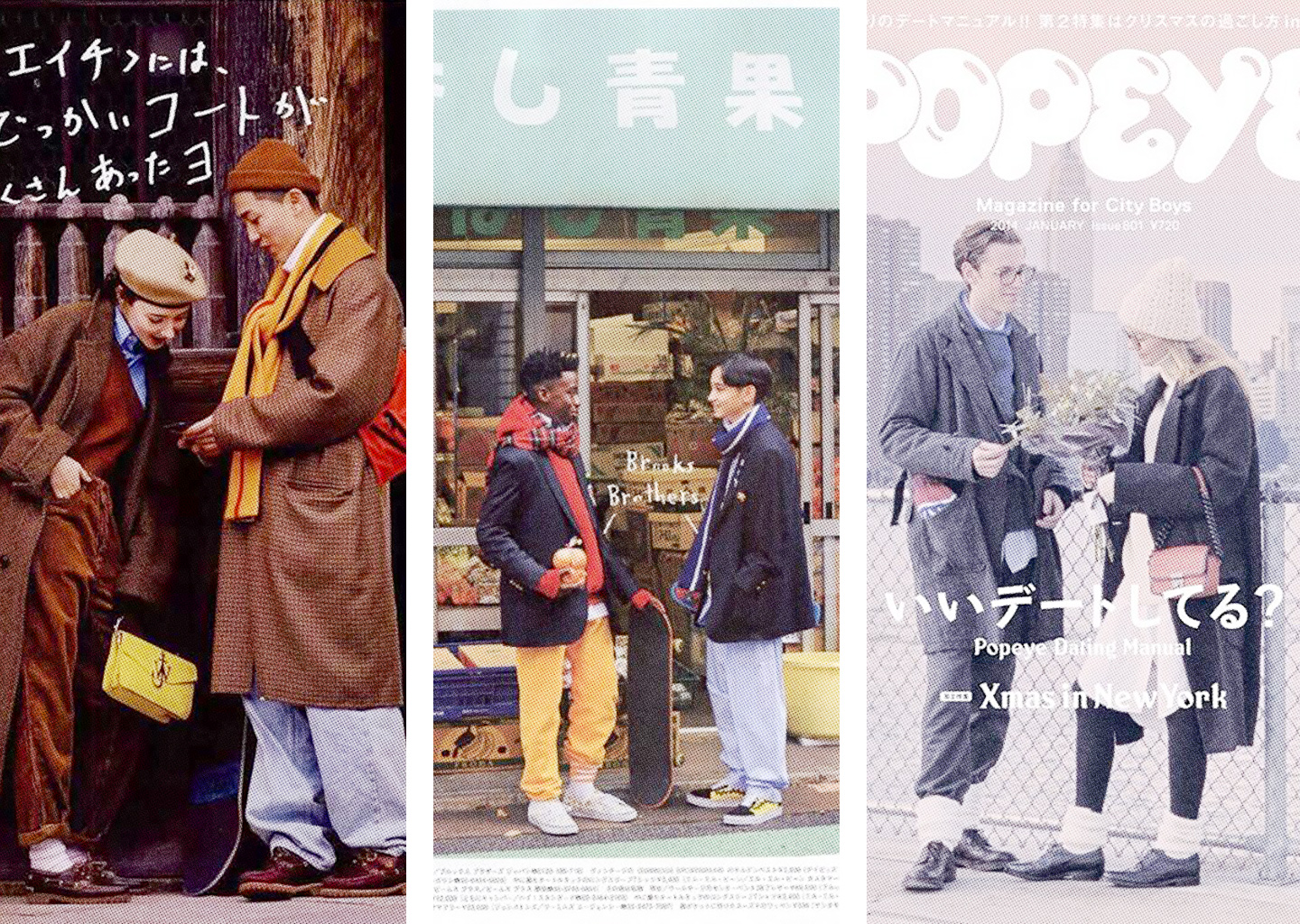 While the relationship between the American and Japanese fashion has been intertwined for decades, it's often one described as a game of cat and mouse. Aficionados from both countries tend to look outside their native bounds to the other’s happenings as a source of inspiration. Throw in the slow speed of pre-digital fashion and a common motif of the relationship often became some version of: whatever is currently out of style in Japan is big in the US, vice versa, so on and so forth.

Since the 1970s, no relic has better illustrated the style relationship between the two than Popeye Magazine. Even as print may or may not (but definitely may) be dying, scans of the magazine’s past have become a staple within the current fashion forum and mood board zeitgeist.

After launching in 1976, its coverage of international trends combined with ground-leveling observation of Tokyo streets gave the magazine a distinct aesthetic centered around the tagline “Magazine for City Boys”. Although magazine staffers can’t point to a specific inspiration for the slogan, the “City Boy” fusion look is one that has reestablished itself in the digital age.

Around the time of its mid-70s formulation, the hugely popular Japanese manga industry had begun to pick up steam towards its golden era during the 80s and 90s. Popeye dug out a lane serving cosmopolitan Japanese youths with an interest in fashion at a time when print media overall was on the rise.

“By the late ’70s, there was also a renewed interest among magazine publishers to focus on youth culture,” Tomohiro Osaki writes of the era in The Japan Times. “TV commercials and paintings were quick to follow, with recognizably flashy and glamorous portrayals of youth.”

Combined with counterculture interests sprung from recent years in a turbulent economy and a renewed gaze toward American fashion, surfer style was the niche influencer of choice within Tokyo street style and Popeye’s first issue set its sight on Los Angeles.

“The hang gliding, the skateboarding, the variety of sneakers,” then-editor-in-chief Yoshihisa Kinameri recalled to the Los Angeles Times. “In Los Angeles, people looked happy and cheerful. It was magical; it was like heaven.”

The debut zine was enough to set in motion a series of follow-up international guides. With its eye on pop culture, the publication would go on to become one of the most successful fashion magazines of all time. In 2012, Takahiro Kinoshita took over as the magazine’s editor-in-chief and led a redesign of the publication while it switched from a biweekly to a monthly circulation cycle.

Like any form of media documenting fashion cycles over the span of multiple decades, the City Boy aesthetic has gone through many changes along with the changing tides of the industry. Through the issues and pictures that have been most-well preserved (i.e. reposted) in the digital age, a more tailored lens of the style can be dissected.

Much like the magazine’s roots, West Coast American style is a foundation to the City Boy aesthetic. Surf and skate culture in particular landing somewhere between "Lords of Dogtown" and the golden age of Stüssy — denim, Vans, longer inseam shorts — are recurring motifs to the City Boy summer look.

Trench coats, overcoats and layered outerwear is one of the most common recurring themes when flipping through any City Boy moodboard. Unlike Los Angeles, Tokyo is a city that experiences more than one season per year and the Fall/Winter time to “really start dressin” is fully embraced by City Boy.

Likely building atop its California roots, the unanimous streetwear influencer that is skateboarding is present throughout many iterations of the City Boy look — rightfully so. Other sports also make the cut as well as the occasional athletic sneaker like the Nike Cortez and even embrace Jordans and other basketball shoes.

Many decades of American style are defined, at least partially, by some form of prep. Japan also has a long history of prep looks and the City Boy look most commonly takes on a suave mix of high-low fusion. Oversized suit coats paired with baggy jeans, a layered sport coat with sneakers and other dressed-down versions of traditional prep menswear is one of the great Japanese street style interpretations of American WASP culture.

From current brands like Kapital to the country’s larger archive ecosystem, vintage Americana has long been a part of Japanese streetwear and Popeye’s pioneer of the look can’t be understated. From Ralph Lauren to Fox Studios, American brands that are sometimes oversaturated stateside often accent baggy or layered silhouettes, adding a pinch of foreign culture atop of typical City Boy fit.