The Story Behind the Grateful Dead's Most Iconic Tees 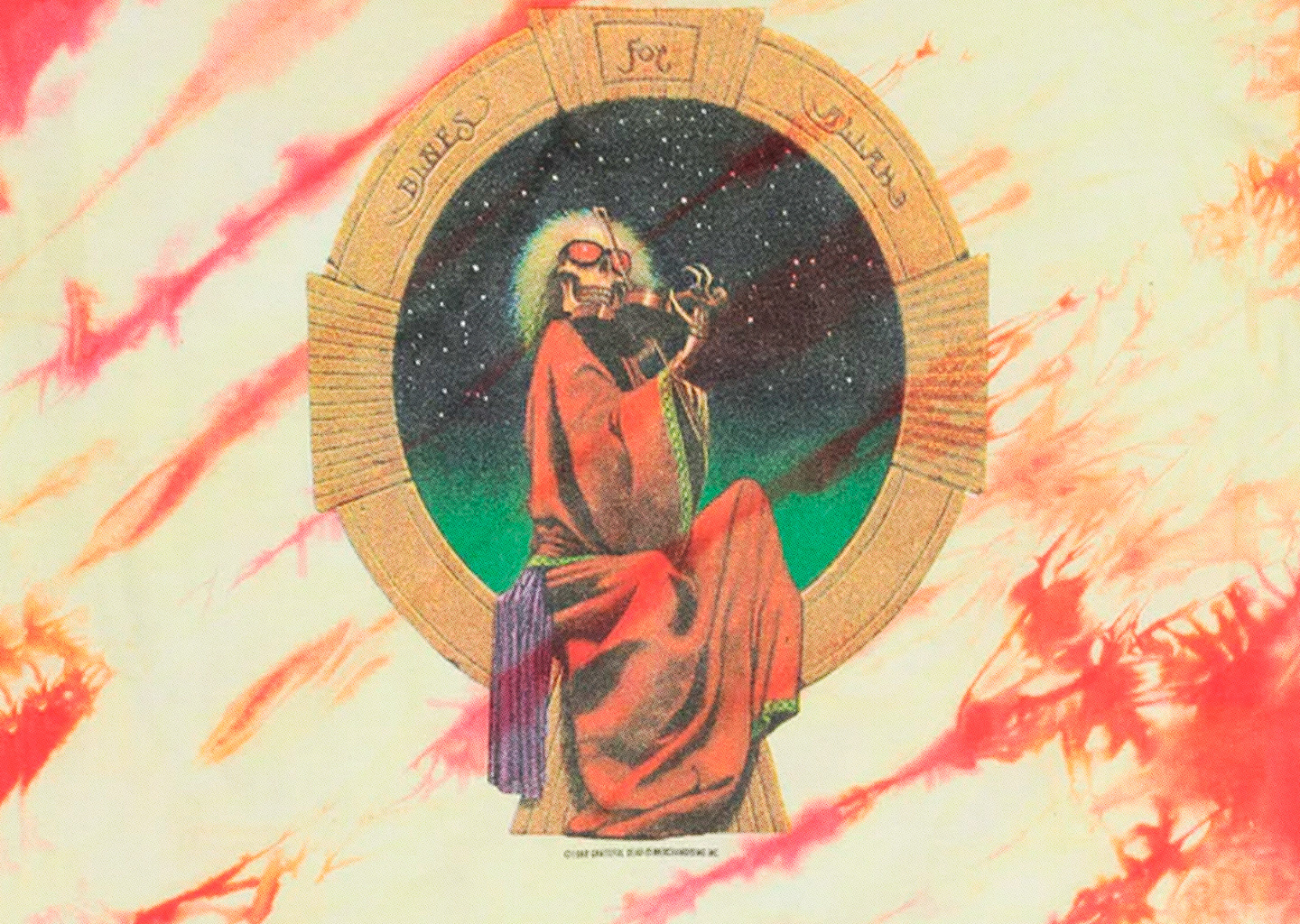 In recent years, the Grateful Dead has become inescapable in fashion. From Nike to Chinatown Market, Jonah Hill, John Mayer, Lebron James and beyond, the band's iconic logos and tie-dye have become streetwear staples and high fashion inspiration. With our newest archive drop, we're taking a look back on some of our favorite Grateful Dead t-shirts, available to reserve now over in the catalog.

There are few testaments to the Grateful Dead’s out-there, psychedelic interests as their love for Pyramids of Giza. The band’s connection to the spiritual world led them to explore ancient wonders, starting with the pyramids.

“I was one of the first people in the band who was on the trip of playing at places of power,” bassist Phil Leash explained. The pyramids are like the obvious number one choice because no matter what anyone thinks they might be, there is definitely some kind of mojo about the pyramids.”

In 1978, the band set out to play a festival-like show at the foot of the great pyramids in Egypt. Between spotty electricity, needing camels to help pull equipment through the sand and the long travel distance required for their devoted hippie fans to experience, the 3-set concert was a testament to the global power of 70s rock and roll.

The 1996 tie-dye tee pays homage to the band’s Egyptian journey and their intrinsic link to spiritual ancient powers.

The band’s Middle Eastern influences had begun a few years before with the release of their eighth studio album “Blues for Allah”. The record marked the final release under the band’s original, independent record label Grateful Dead Recordings. Throughout their early releases, the Dead’s independence was a cornerstone to their sound and brand — one that meant they could have complete creative freedom. Upon its founding, the band sent a letter to fans, musing about potential distribution methods like using ice cream trucks to disseminate their music. After reaching the stratosphere of 70s rock, the band signed with Artista Records in 1977 to allow them more time to focus on music-making.

The Dead’s iconic dancing bears have long been a persistent image throughout the band’s merchandise journey. The furry animations first appeared on the back of the band’s 1973 album “The History of the Grateful Dead, Volume One” also known as “Bear’s Choice” from Owsley “Bear” Stanley’s hand selection of recordings used for the project.

Artist Bob Thomas created the bears (which were meant to be seen as high-stepping rather than dancing) from a metal printing slug which featured a similar cartoonish animal. In the years since the bears have become a recurring symbol and popular recreation among bootleg merchandise.

The most recognizable of the Dead’s logos, the lightning skull was also the result of creative collaboration between Bear Stanley and Bob Thomas. Known as the “steal your face” logo, Stanley is said to have been inspired by a highway sign image that included a split orange and blue circle design. Originally, the logo included only the lightning bolt in a red, white and blue colorway but was soon flipped to include the skull to drive home the Dead’s “dead” branding.

For the 1992 Summer Olympics, the band famously sponsored the newly established Lithuania men’s basketball team and provided the players with a unique tie-dye kit that remains a vintage grail for both basketball and music fans alike. ⁣
⁣
Prior to the unlikely collaboration, at the previous Summer Olympics, a Soviet Russia team whose five starting players included four Lithuanians won the gold medal after beating the United States. ⁣
⁣
In 1990, Lithuania declared its independence from the USSR but two years later the country lacked the funds to send a basketball team to the 1992 Olympics in Barcelona. Sarunas Marciulionis, who was playing in the NBA for the Golden State Warriors at the time, partnered with the team’s assistant coach, Donnie Nelson, to help fundraise the money needed to send the team to Spain.⁣
⁣
After a local newspaper article was published about the cause, Nelson received a call from a representative of the Grateful Dead. Jerry Garcia, a fan of both the sport and the team’s story, invited the pair to a Grateful Dead show where the band offered to sponsor the team and also provide custom uniforms designed by New York artist Greg Speirs. The result was a funded trip to the games and a memorable tie-dye, skeleton uniform combining the sport and the band’s signature motifs. ⁣

A combination of the band's two most iconic symbols, the 1995 band merchandise marks the end of the original Grateful Dead's legendary run. The band's final show was held at Soldier Field in Chicago on July 9, 1995. The deteriorating health of frontman Jerry Garcia had grown evident during the band's tour. A month later, a week after turning 53, Garcia passed away in a rehab clinic in California. The band disbanded thereafter but its surviving members would return alongside John Mayer in 2015 for a revival as "Dead & Company". The band's rebirth has significantly contributed to numerous fashion collaborations as well as a fondness for the Dead's merchandise (real and bootleg) during its original run.