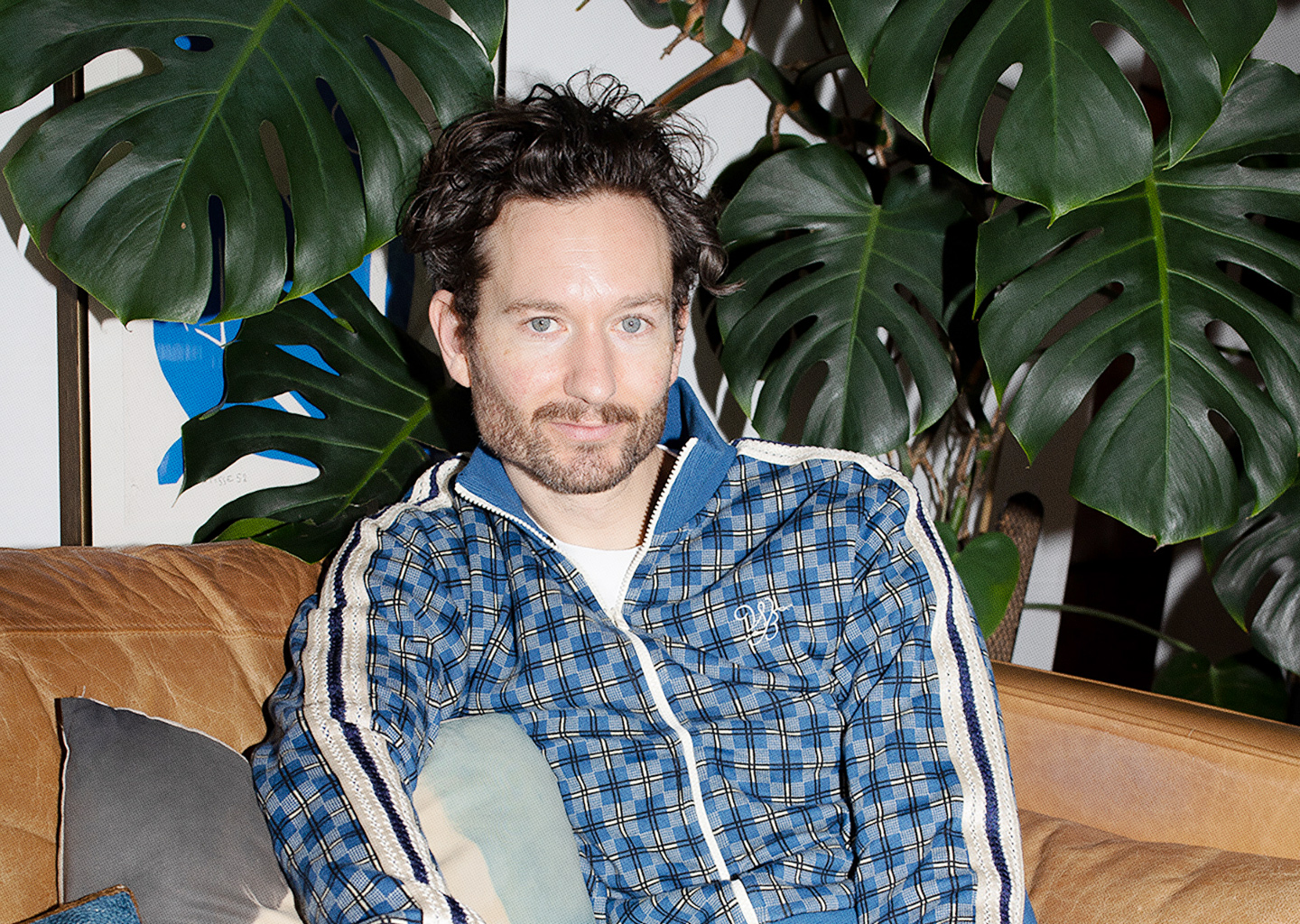 It’s difficult, if not impossible, to estimate the total number of padlocks that latch shut New York City’s many street-front businesses. Over the past year, a growing number of these innocuous metal fasteners have become something of a totem within a makeshift Manhattan scavenger hunt. Stroll down Canal or Spring Street, or even past a quiet few community gardens in East Village and you’re likely to spot a bright red “I LIKE YOU”  jumping off a white sticker plastered to the back of one.

The polite greeting is the work of Isaac Hindin-Miller, a former fashion journalist turned DJ turned wholesome corner of New York City TikTok. “Nobody asked. . .” Isaac will start his adventure-filled city life vlogs, a subversive flip on the typically self-referential, main character framing of most influencer content. Each video is also punctuated with the phrase  “I like you” yelped through a fading New Zealand accent. The yell, which has since become a full service nightlife brand, is a callback to Isaac’s early aughts blogging days — a winding road that has been realized as an earnest plank at the foundation of a welcoming digital and IRL community.

Sitting cross-legged on the familiar leather couch that is the stage to many of his social media videos, we caught up with Isaac to find out more about what he likes, ranging from clothes, to nightclubs, surfer bandits, and more.

What is your favorite Season?‍

Do you have a favorite piece of clothing in your wardrobe right now?‍

Yeah, this jacket that’s kind of like a long-haired velvet Supreme turquoise jacket. I got it in 2018. It’s funny because I never used to wear Supreme but then I had a couple friends that worked for Supreme and I would see them wear stuff that had no logos or branding and I’d be like “holy shit what is that amazing thing that you’re wearing?!” and they would say Supreme. So then I started looking at the non-branded stuff.

The stuff that doesn’t sell out immediately.‍

Exactly, I got this on sale for like under a hundred bucks.

Is there any essential piece of clothing you think a guy should have in their wardrobe?‍

I think good jeans are really important. I buy all my jeans from Wrangler. I can’t stand stretch denim, I don’t think guys should wear stretch denim.

I would agree with that.‍

What is your really good pair of boots?‍

I’ve got two. I’ve got the Our Legacy Camion boots in the brown suede. I wear them almost every day. And then I also have these Prada black zip-up ankle boots. I also like a really good pair of combat boots, as well — like super heavy, army boots.

How do you go about putting together a DJ outfit?‍

So I recently started having to take off my necklaces when I DJ because I jump around so much that they get caught in my headphones and then I get stuck so I can no longer wear necklaces while I DJ.

A casualty to the game!‍

I still always wear rings though because I feel like people focus on my hands while I’m DJing and I like to wear rings.

I always take a change of t-shirt. Generally I dress pretty comfortably unless it’s like an event that’s going to be very chill and then I might wear a suit but for the most part I’ll wear an oversized t-shirt cause I’m so active and it gets so hot in the room and I get drenched and then I have another one in my bag that I’ll change into halfway through the night.

The women’s trend I hate the most are those pants masquerading as thongs. The pants with like cutouts, I cannot stand those. I think they’re so bad.

Wear whatever you like, but I’m not a fan of skinny jeans. I think the cowboy trend that came in pretty big this year is really cool. You see a lot of guys wearing tiny vintage t-shirts and flared pants which I think was an interesting development after everyone was wearing tight pants with big t-shirts.

Flipping the triangle, if you will. ‍

Exactly. I think dudes are really showing out right now.

That 70s thing that’s happening, that glam. The Cuban heel boots. Before Covid I feel like everyone was still wearing Nikes and slim, straight-leg jeans with an oversized t-shirt.

What’s a misconception people have about New Zealand?‍

People think “kiwi” is a derogatory term but it’s not. We’re called kiwis because of the bird, not the fruit.

Tell me about the fashion scene in New Zealand.‍

Growing up in the 90s I would say that New Zealand style was very similar to the Antwerp Six. So let’s say Australia was more like Los Angeles, a bit flashier, the juicy couture sort of thing, New Zealand was everything black, draped. When I was growing up, Margiela, Rick Owens, Comme des Garcons, those were the brands that everybody was obsessed with.

Yeah, I was lucky enough to be surrounded by incredible multi-brand retailers that introduced me to all these incredible brands. When I was 15-years-old, I would walk into these stores and discover these things that felt really exciting and felt like this whole other world.

Do you have a store you remember the most?‍

We had this store called Fabric that had the Commes des Garcons. The guy who started the store was Simon Miller. He went from owning the store to moving to LA to starting this hardcore denim brand.

Zambesi is another store. They’re a brand from New Zealand but they also sold Rick Owens and Margiela and Walter Van Beirendonck and a lot of cool, very Belgian brands. The sister of the designer from Zambesi also had a brand called NOM*d. They were both very dark, drapey, what we would call “intellectual fashion” and then Fabric had the more sort of Japanese, French, those kinds of brands. I would go into their store and I couldn’t afford to buy a t-shirt or a shirt but I would buy the Commes des Garcons wallet or perfumes.

Do you have a favorite brand right now?‍

The brand I’ve been buying the most recently is ERL. I bought like four or five shirts from them in the last month or so. I was really into Brain Dead for a while, especially with their camp collar shirts. Those are the brands I’ve bought the most in the past couple years.

How about when you were growing up?‍

The brand that really got me interested in fashion was ksubi. It was the first time I ever encountered designer jeans. The sort of stuff you’d still wear every day but elevated. Back then ksubi was so groundbreaking. I feel like Hedi Slimane was the person who made people start buying skinny jeans but ksubi was the brand that made it cool for everyone to wear it.

When they were coming up there were a bunch of like Australian surfer bandits and their whole thing was that they would make jeans and then drag them behind a station wagon down like dirt roads so the jeans would get fucked up. So there’s this whole story behind it. Especially coming from New Zealand, like going to Australia, you wanted to be a part of that crew. They were the cool guys that threw the best parties. The older dudes that I would look up to were always wearing it. I was probably 18 when I did layaway for my first pair of ksubi jeans. I would go in every week and pay like 20 dollars and it would take me 9 months to pay off this pair of denim.

You've been making  merch and even doing some clothing collabs, how’s that going?‍

Good. Before I did anything else, I started a blog back in 2008 and the last three words of every blog post were “I like you” and issaclikes was the name of the blog. I started doing stickers back then that said “I like you” and people liked it. When I started DJing in New York I decided to start doing it again to give to people at gigs so I started doing that and then eventually doing t-shirts and it’s kind of grown from there. These days the “I like you” parties are sort of the main focus and the merch supports that.

Do you have aspirations to grow the merch side of things beyond just a supporting act?‍